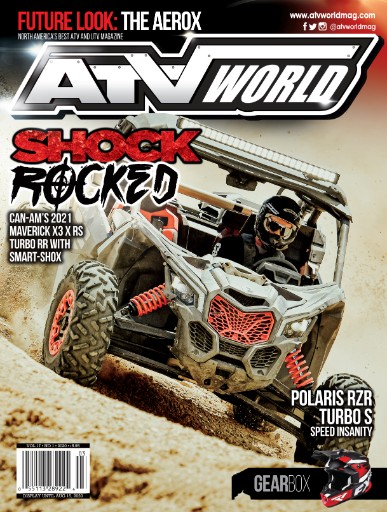 ATV WORLD Magazine publishes SIX complete issues per year, and is one of the largest ATV publications in North America. The editorial content features in-depth articles on how ATV riders are using their All Terrain Vehicles. Recreation, Tourism, Racing, Hunting, Farming and fishing, are just a few of the many features that can be found on the pages of ATV WORLD Magazine. ATV World magazine is printed and mailed to ATV enthusiasts throughout North America. It is also distributed on the newsstand, through ATV Dealers, and through the largest retail aftermarket distributors. It is also distributed at many consumer Powersport and Recreational shows and is the Official ATV magazine for two of largest Powersports Shows in North America; the Toronto International Snowmobile, ATV & Powersports Show, known as the 'World's Largest Snowmobile and ATV Show', and the North American Motorcycle SUPERSHOW. ATV World magazine is also mailed to the entire membership of many regional ATV Associations and Organizations right across North America. ATV World magazine features some of the best technical, tourism, automotive, and special feature editors and has correspondents in every region to bring readers the most current and up-to-date news on ATVs in the country, all written from the seat of an ATV.

Get a digital magazine subscription of ATV World for your library, school or business which your patrons, students & employees can read on-the-go.